Today the Mega and Delta fleet staff woke up bright and early at 6am to up-anchor at the beautiful Long Bay. Staff members motored their slumbering students to The Baths on Virgin Gorda as the sun rose above the island peaks. Once on the ball, campers woke up and began to prepare a breakfast buffet that included bagels and cereal. Campers then headed to shore at The Baths for the beloved hikel (hike/snorkel). The Baths are a large rock formation that visitors can walk through to explore, they are one of the BVI’s most iconic sights for a good reason! Once we walked through the rock maze, we enjoyed time at a beautiful cove before beginning our snorkel. Students spotted a number of fish and coral species and even a stingray! Everyone had the opportunity to jump off of “jump rock,” many students even showed off their flipping skills! 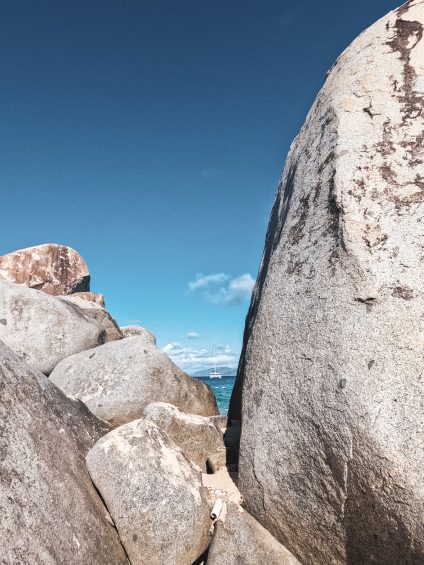 Once back on boats, campers began a yummy lunch of nachos. We dropped the ball and had a lovely last sail back to our home base of Hodges Creek Marina. Students spent the afternoon cleaning their vessels and packing their belongings. Everyone was served a hot dinner of veggies, mac & cheese, and ribs. After dinner, the entire Mega and Delta fleets gathered to watch a slide show of their past three weeks. Each boat then performed a skit and had a good laugh as they watched their friends perform! Awards were given out to recognize the winners of chili cook-off, yesterday’s race, and all of the Olympic events. Campers then returned to their boats to complete their crew tests and write airplane letters to their crewmates. Everyone then settled in for the night, reminiscing on the good memories.