Following a year without students, the marina docks were a buzz with life early in the morning as staff began the days preparations to welcome our first crews of the 2021 season! Vessels docked, cabins cleaned, and provisioning distributed  by staff all eagerly awaiting the arrival of their new students.

Students landed at Beef Island Airport (EIS) directly on Tortola, but a majority ventured to St. Thomas (STT) where they were met in baggage claim by our staff members and together they caught a private ferry to Tortola, BVI. Those who arrived from St. Thomas experienced a delay in their arrival to our home base due to issues with BVI Customs and Immigration.  After a very long day of travel, students began flooding the docks, greeted with the smiling faces of their Captains & Mates, their vessels, and a spread of hot food (chicken, rice, and coleslaw). Following full stomachs, a call home, and a shower a hush fell over the docks once again as lights were dimmed and crews fell asleep to prepare for the day ahead.

Even with a lie-in set to start our second day of program, students awoke before the morning alarm in eager anticipation to continue getting to know their new crew members. Each boat’s breakfast teams enticed their new friends with a breakfast buffet to fuel their energy for the day ahead. Following a top-off of food, students received a prior to first briefing. A prior to first is an in-depth orientation of the boat explaining of how things work and safety protocols to maintain while onboard.

Following the prior to first briefings, the students jumped right into a de-docking lesson to prepare them for their first maneuver aboard as a team. Between the de-docking lesson and the actual de-docking, boat photos were taken and a mini-Mike talk was given by the Early programs’ Program Director, Eliot Faust. The mini-Mike talk was to welcome the students down after a LONG year’s wait, inform them of Sail Caribbean specific rules, and to discuss the once-in-a-lifetime adventure they’re about to embark on.

One-by-one, with students on the helm, eight (8) boats flawlessly made their way off the docks and out to sea!  Together, crews learned how to raise/lower their mainsail and to furl/unfurl their jib. Canvases of white reflected off the deep blue as eight boats raised their sails for the very first time. The wind in their hair and a fresh ocean spray kept students company as they stretched out their sea-legs once more on our programs… or for the very first time! After a 3 hour sail, canvases were lowered and furled and students prepared for their first mooring ball pick-up. A mooring ball is a place to safely secure your boat for a few hours or the night. The mooring ball floats on the surface and is connected to a large, heavy anchor permanently attached to the seabed.

Like ducklings in a row, vessels made their way into Benures Bay to pick up mooring balls. Seven boats ( Miss Devine, Sara, Judges Chambers, Kajsa, King Lewis, Tramontane, and Moët) successfully picked up mooring balls. With the marina quickly filled, one boat (Electre) quickly expanded their boating knowledge and anchored in the bay instead!

Once secured, students were able to take a dip in the sea before sunset showers and dinner preparations for chicken fajitas began. With pans sizzling and rice fluffing up, dinner was ready in no-time and students sat together for another family-style meal.

Following dinner, all will be mustered to complete their daily chores to keep the boat in tip-top shape. From swabbing the decks to cleaning their cabins boats will be a buzz with dancing crews as they tidy up for the evening.

With an early lights out planned, students and staff will settle in for their first boat meeting to discuss how the day went and reflect on all they’d learned. 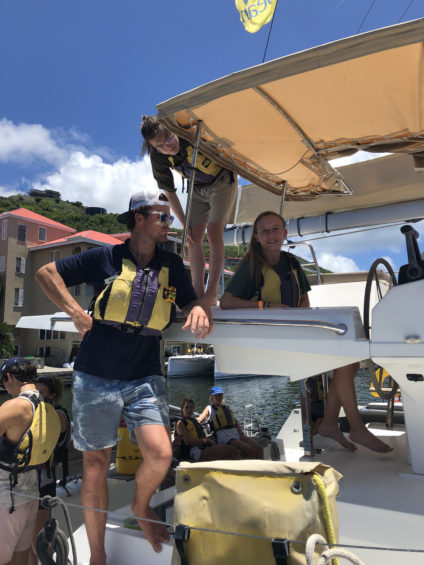 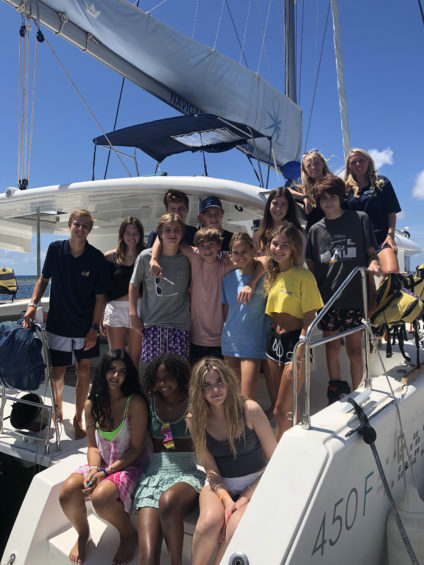 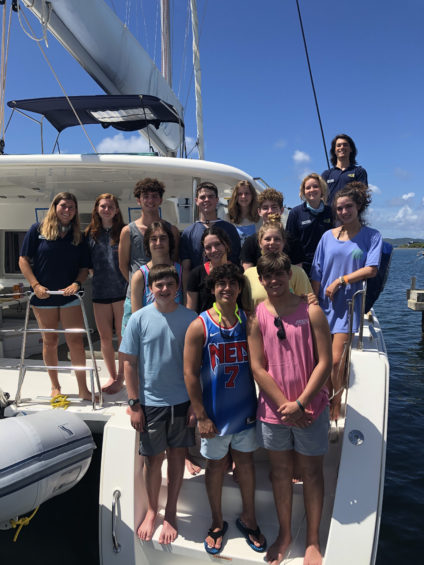 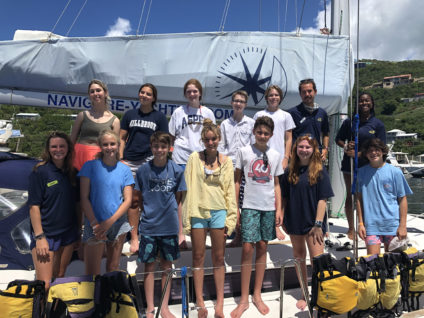 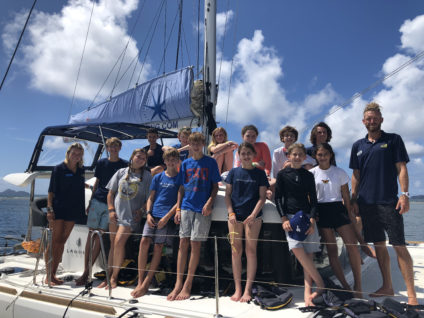 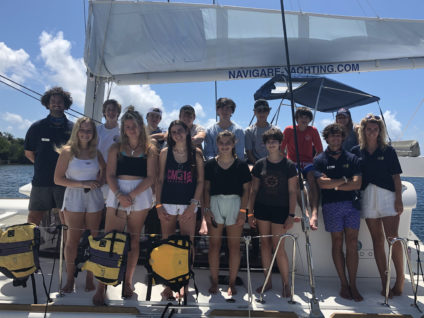 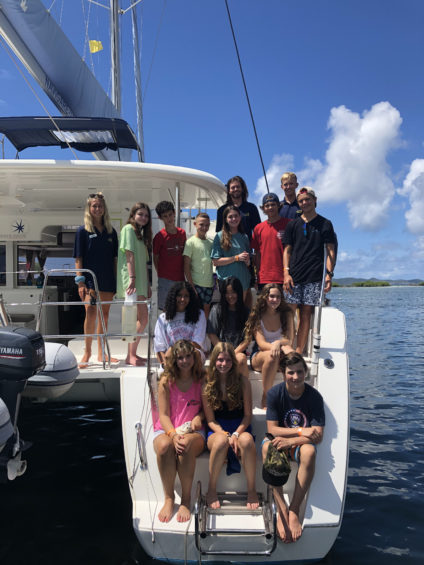 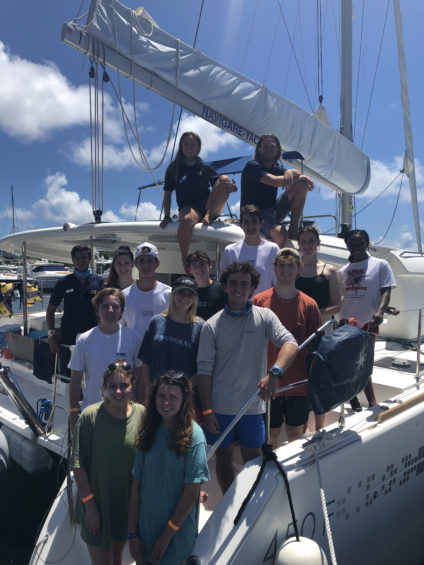 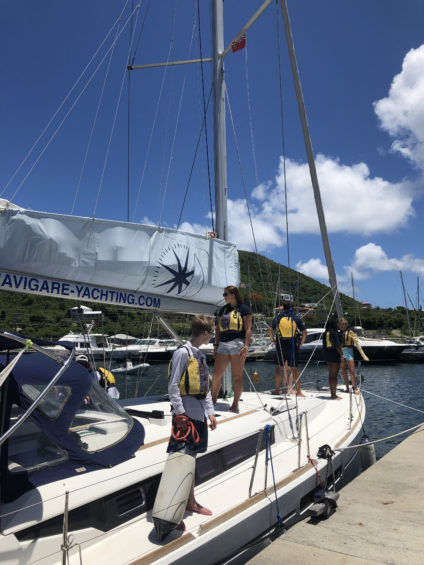 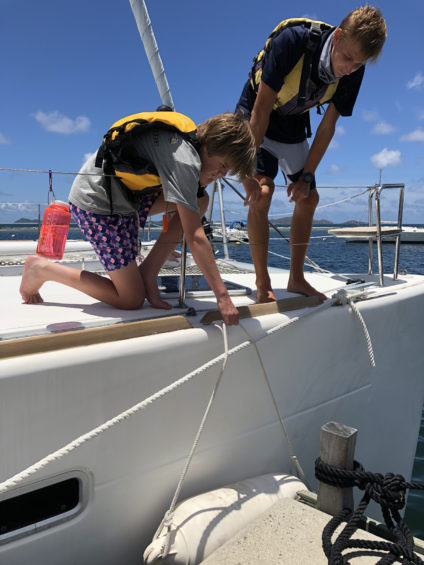 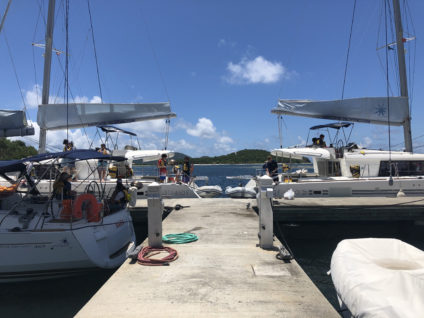 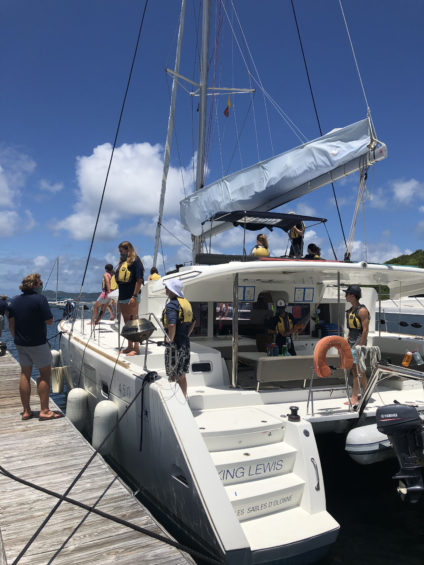 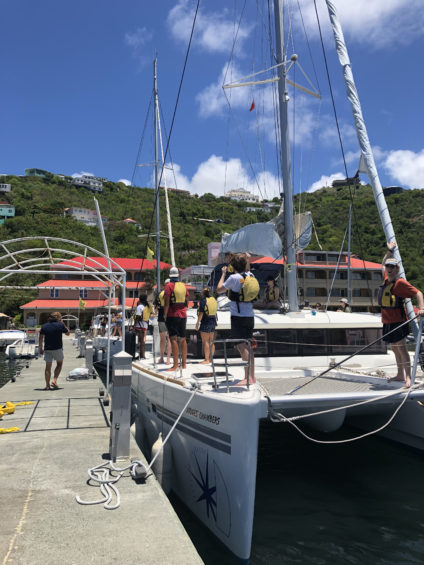 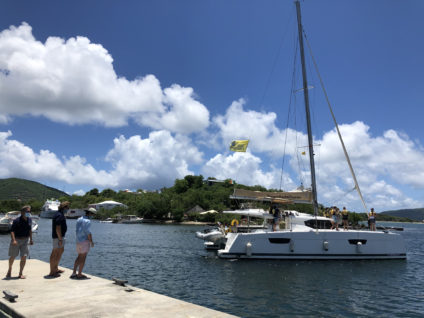 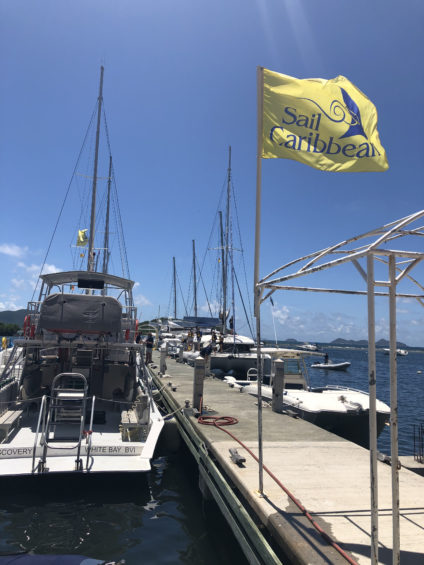